We’re going to simulate a signal detection experiment and an “ideal observer” (an observer who behaves exactly according to signal detection theory). This is always a useful thing to do when trying to understand a decision model, experimental method or an analysis tool. You get to control and play around with the simulation to see what effect it has on the analysis that comes out. 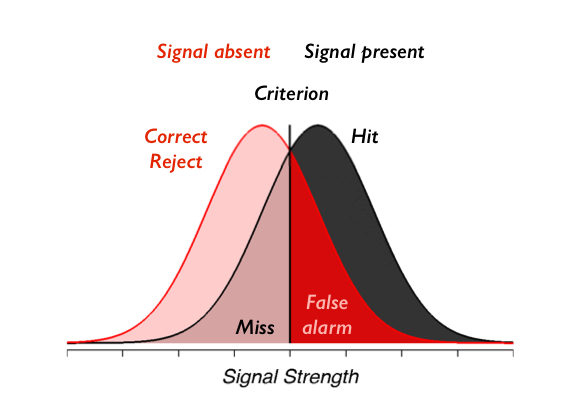 We can make a heatmap to show the binary values:

Ok, now we want to simulate the signal that the observer actually gets to base the decision on. Remember that in applying signal detection to cognitive neuroscience you should be thinking of the signal as a neuron or population of neurons response and that the magnitude of this response (e.g. spikes per second) is monotonically related to the actual signal strength. The signal is corrupted by random noise. In particular, signal trials should come from some gaussian distribution and noise trials should come from another gaussian distribution that differ only in the means. This is an assumption about the process that is termed \(iid\) - the signal and noise come from independent identical distributions.

We can look at a heatmap of the signal values:

This is somewhat helpful, but it doesn’t really show us the distribution of values. To do that, let’s first put all the data into a pandas data frame.

Then let’s make a histogram and density plot.

Ok, we’re good to go. We have created the stimulus that our ideal observer will get to see (signal) and we know which of the trials come from the signal and which from the absent distributions (signal_present).

Now we are going to simulate an ideal observer which will behave just as signal detection says. They will choose signal present (response = 1) when the signal they get to see (signal array from above) is greater than their internal criterion and they will choose signal absent (response = 0) when the signal is below their internal criterion.

Let’s start by making the criterion right in between the signal present and absent distributions that we created above. That is, let’s set criterion to 0.5 and make an array of responses:

Again, not too informative, but it would help us catch strange cases like response always being True, which might indicate a problem in the code.

Ok, so now we have our experiment dataframe (signal_present) a simulation of the signal it generates in the observer (signal) and the ideal observers responses (response).

From these you should be able to calculate hits, misses, correct rejects and false alarms.

Question 5
What should $d'$ be given how we made the signal and noise distributions? Refer to the slides or chapte reading to remember the formula for d'.
Your Answer
Delete this text and put your answer here.

The picture you should have in mind is: 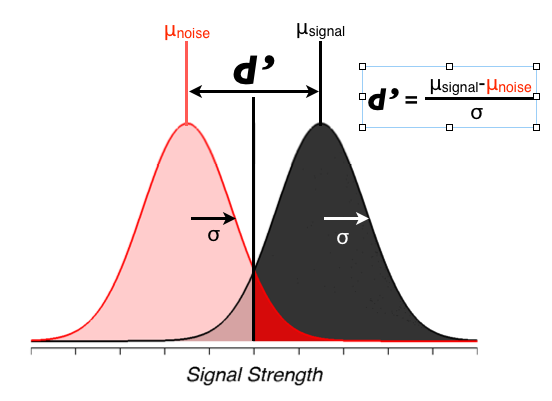 Ok, now we know what it should be in an ideal world we’re ready to think about the approach for computing \(d'\) from behavioral data? 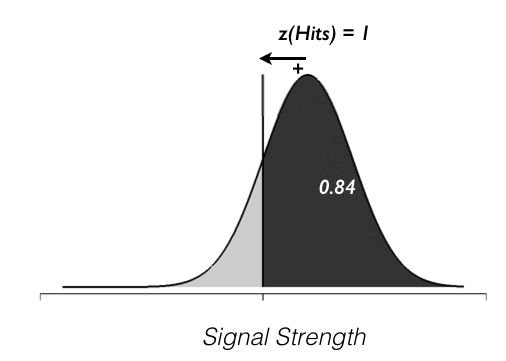 The problem is that we don’t have the zscore for the hits directly. Instead we have the proportion of hits or false alarms. Interestingly those values relate directly to the area under the curve of the signal strength/internal response distributions. Thus we can use the inverse cumulative density function or inverse CDF to look up the z-score associated with a particular area under the curve for a standard normal (mean=0, sd=1).

Stop and think
How close is the d' you got to the expected value? Why is it different?

Now let’s simulate an observer that doesn’t want to miss as much and see if we get a similar \(d'\) from the data.

Stop and think
Did d' change? Try a few other threshold rules. Is it always the same value? Is that what you expected? If not why do you think it changes?

Stop and think
What value of the response threshold above will make c closer to or equal to zero? Try adjusting it until you find the value. Think about why that is.

Now, let’s make an ROC curve. In some ways a ROC curve is a more theoretical object because it can be difficult to construct it for a simple detection experiment. In fact, for the simulated data we have been dealing with so far, it is not possible to plot the entire ROC curve because we don’t know exactly how the subject might perform using a threshold different than the one we saw them adopt.

However, if we can draw simulated samples from the signal and noise distributions we can draw the expected curve by applying different values of the threshold ourselves. In values of the spike counts for the neurons preferred direction (signal) and the neurons anti-preferred direction (noise, what they called the anti-neuron). Will just do it by pulling actual values from a signal distribution that is gaussian with mean of 1 and standard deviation of 1, just like we did above. For the noise, let’s do mean of 0 and standard deviation of 1. Make two arrays of length n = 1000, one for signal and noise using the techniques from above:

Check that the procedure worked by computing the means and standard deviations of signal and noise and making sure that they are what you expected (always good to double check everything when programming to make sure that things are working out the way you expected).

It’s also helpful to make plots like we did above:

Ok, how do we compute the ROC curve? What’s on those two axes. Remember? 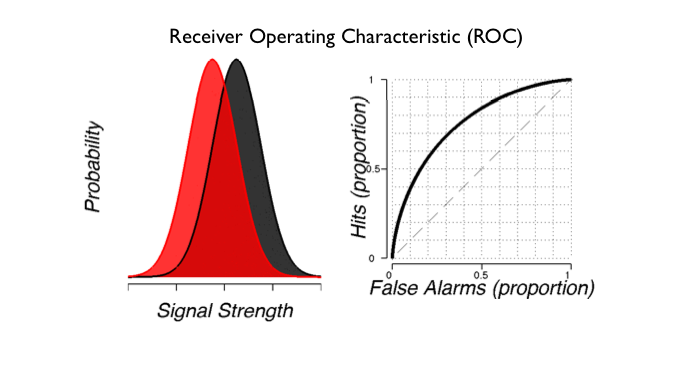 Ok, so that is computed for various criterions, right? So, if you think you know how, try to compute a curve from the signal and noise distributions.

First we need to create a large number of different criterion values. How about 100 different values between 10 and -10 using np.linspace().

Now for each setting of the criterion we can compute the hit and false alarm rate.

What did you get? Is it right? Well, one way to check is to see if a simulation of 2AFC will give you the same (or numerically similar) values. The experimental logic says that if signal is greater than noise then the ideal observer will get the 2AFC right, otherwise the observer will choose the noise interval and get it wrong. So, that’s pretty easy to simulate. Try it!

Question 6
In what we just described, I suggested that you can't compute the ROC curve unless you have samples from the underlying internal response distributions (e.g., neural spike counts). Is this correct? Think about what the meaning of the ROC curve is. Can you think of a way to assess it using an experiment where the primary data are just the false alarms and hits for different conditions?
Your Answer
Delete this text and put your answer here.
Question 7
In the example reported above we computed the hits, false alarms, misses, and correct rejections, along with the $d'$ and $c$ values for a case where the signal absent distribution had mean 0 and standard deviation 1 while the signal present distribution had a mean 1 and standard deviation 1. Recompute these statistics for a case where the mean of the signal distirbution is 2 and the criterion is 0.4. What effect does this have on d'?
Your Answer
Delete this text and put your answer here.